Inflation figures released by the Australian Bureau of Statistics (ABS) for the March quarter 2014 paint an encouraging picture for both home owners and buyers in the country. According to the ABS, the headline rate of inflation reached 2.9 per cent – slightly shy of the target set by the Reserve Bank of Australia (RBA).

The Australian economy is strengthening and there have been recent months of rising underlying measures of price growth, which if sustained, could push inflation past the RBA’s target inflation rate of 3 per cent.

While inflation figures from the March quarter were lower than expected, some economists predict the official cash rate will remain low for some months.

Commenting on the release of the statistics, Housing Industry Association (HIA) Senior Economist Shane Garrett said the results are a boon for the residential construction industry and will help the recovery continue.

“There were fears that inflation would break the 3 per cent threshold during March, but today’s figures will have soothed these worries somewhat,” Mr Garrett noted in an April 23 release.

Mr Garrett said he expects interest rates will “remain at very low levels for some time to come”, giving home owners and buyers relief and encouragement in the residential real estate market.

The official cash rate has been at 2.5 per cent since August last year, providing attractive conditions for investment in property. Since then, the number of home loan approvals has been on the rise, showing that Australians are taking advantage of financial conditions and the growing property market.

Recent information from the ABS found home loan approvals were off to the strongest start in years at the beginning of 2014, likely spurred by the low cash rate environment.

“The data released today by the ABS confirms that 2014 is off to a great start – home owners and buyers are returning to the market and they’re building momentum,” said Loan Market Director Mark De Martino in an April 9 statement.

Where does the market say?

Louis Christopher from SQM Research has an interesting take on things.

Forget about what various economists and talking heads think about where rates are going. This is what I follow pretty much all the time if I want to get a good understanding of where rates are headed. 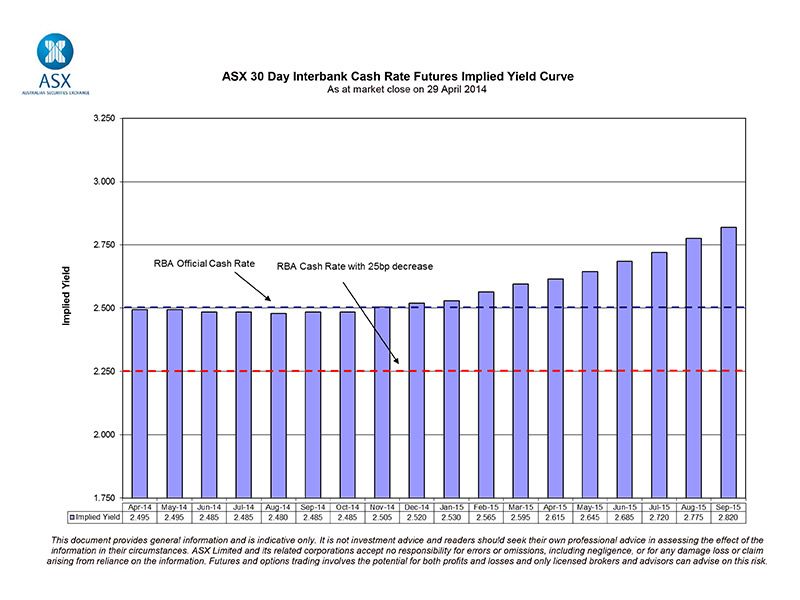 In short, it is net sum of various bets on where the RBA may place the cash rate in future.

The futures contract is most often used as a hedging tool by the banking sector to cover themselves in case of cash rate changes. Over time, it has been a rather reliable measure of what the market is thinking of the future in regards to interest rates. And while it has at times got it wrong, more often then not I have found it to be a reliable cash rate forecast tool.

I raise this now because since the rather benign CPI numbers from last week, money market interest rate expectations have decidedly changed. Previously the market was expecting two rate hikes in the first half of next year. One in February/March and another in June to take the cash rate back to 3%. As you can see in the chart, that second rate hike is now priced out of the market and indeed there is only a 50% chance of an initial rate hike by April next year.

Bottom line: the money markets don’t think rates are going anywhere this year. That’s what I think too and it is in line with public statements from the RBA that they see stability in interest rates for the foreseeable future.

With the official cash rate predicted to stay low for some time, home loan approvals could grow to be even stronger throughout the coming months.