Tim in the office has just returned from two weeks (in 3) away helping support the Chain Reaction charity bike rides from Melbourne to Sydney and then from the Gold Coast to Brisbane (via Byron).

Ray White Byron Bay is a big believer in giving back to the community, so letting Tim go to help support a charity raising money for sick kids (Tim tells us this line become a potent heartstrings-tugger when dealing with irate truckies) was a no brainer.

We’ll let Tim take up the tale of the Melbourne – Sydney ride!

It was good to fly home to Melbourne and see the family very briefly before an epic week long ride from Melbourne to Sydney.

When I say “ride”, I of course mean I was driving the mechanics van at the rear of the group.

The ride was to be separated into 7 days with the following distances and metres of climbing.

On their own, each day was not too imposing. Though I realise some readers may shudder at that assertion, the level of experience and training in the group meant each day was not taxing in and of itself, however, compounded with 6 other days? Well yes, hard.

I will admit a feeling of trepidation upon arrival at the MCG – I’d never done anything like this before, and my friend Tim (whom I was helping) promised a crash course but gentle submersion into the management of a ride like this. This was to be an easy training week with “Lakey” who was an experienced hand at this, in preparation for the Queensland ride which I’d handle myself.

(Though, his email warning of irate truckies and the need to protect riders from crazy motorists at all costs did raise my suspicions vis-a-vis the easy “ride” I’d have at the rear).

Basically, we left the MCG in Melbourne in high spirits and cold, but clear, weather. 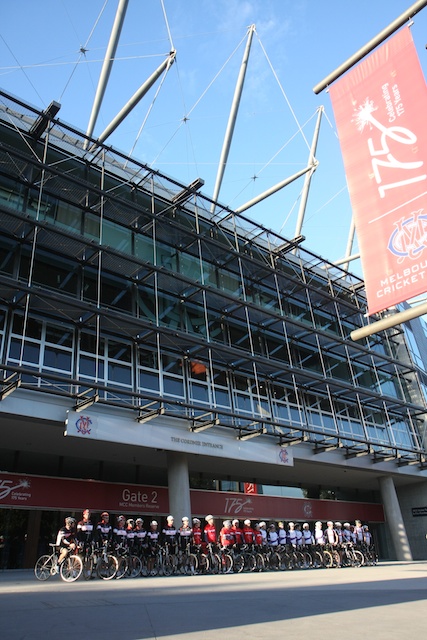 Day 1 passed uneventfully as we negotiated Melbourne’s quiet Saturday traffic, passed world famous SBS commentator and all round nice-guy, Matt Keenan and got into Melbourne’s country side around Kinglake. The evidence of bushfires was still very clear and you could see the devastation wrought on Black Saturday. Despite being a Melbourne cyclist for a long time, I never did manage to ride out in Kinglake (sadly).

Life was easy with Tim in the front car, despite a crash (also called an “off”) on the very first descent of the day. I learnt all about what I needed to do when I made the move to the rear/following car, and took loads of photos. 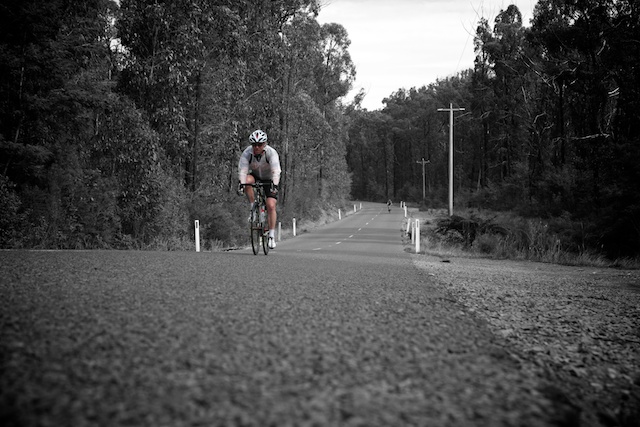 We rolled into Trawool with enough time for me to try to mitigate the effects of a Subway lunch with a 10k run.

Followed by beers and a not too healthy buffet dinner…a template for the rest of the week sadly.

Boy was I excited! Milawa! Red wine and cheese!

Day 2 saw me move to the rear mechanical car with Lakey, where my real training would begin.

Did I mention how early we were getting up? I started with 6.15AM but quickly moved it to 5.30AM (stretch, quick bit of yoga, breakfast, email, radios). 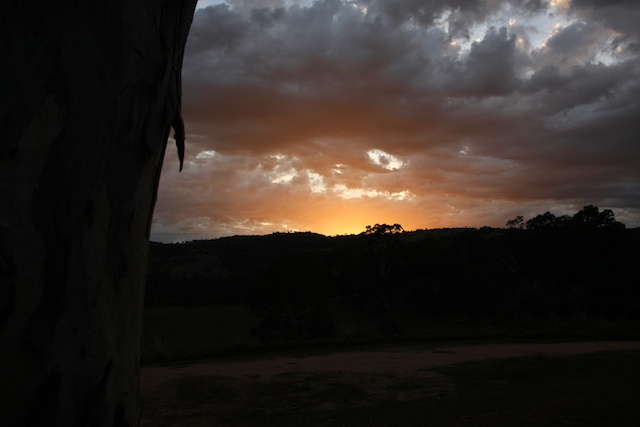 It was at this point I realised it was all hits and giggles, lording it up in the front car with Tim. It was in the rear car that the real work happened.

Between managing mechanicals (flat tyres or something else), managing endless traffic banked up behind us and managing truck drivers, it was full on.

After the first stop, I was handed the keys and thrown into the deep end driving, managing trucks and handling cars.

I quickly learnt a few things:

One particular aspect of the ride tickled me pink. We were honour bound to fine people if any of our rules were transgressed in order to raise money for the charity.

And the funny thing was, the riders saw it as a badge of honour to be fined.

If we saw some riding or something that didn’t have a rule governing it but which was silly, well, that was a fine. 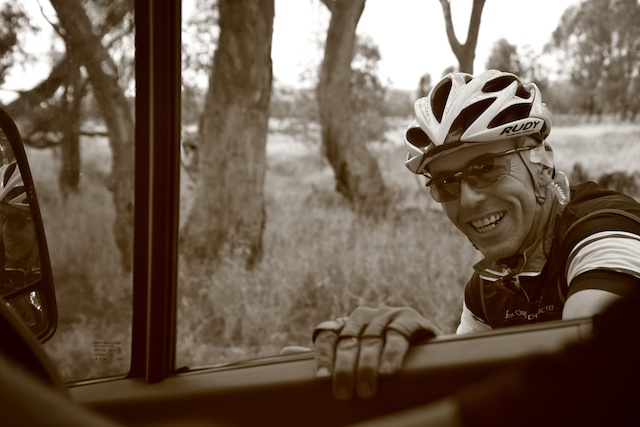 We managed to get through to very quiet country roads in beautiful North Eastern Victoria – probably my favourite part of Australia – without any hitches. 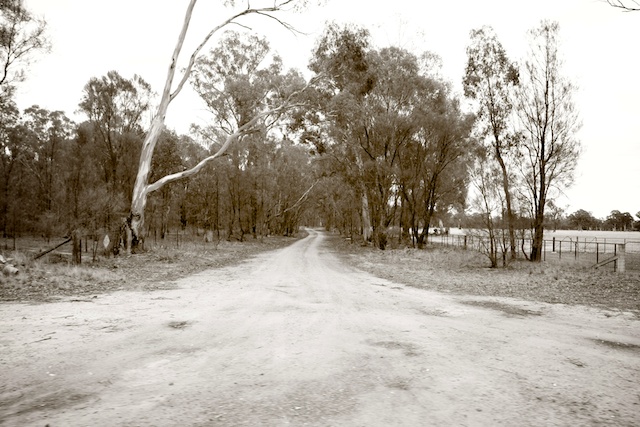 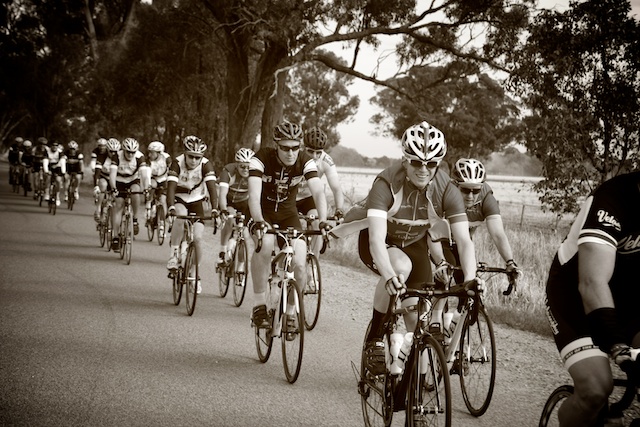 The day ended at beautiful Lindenwarrah estate opposite Brown Brothers in Milawa. Fortunately I was able to catch up with an old friend for a red and some cheese at a local cafe.

We’ve been lucky with weather so far but tomorrow looks bad.

Day 3 dawns drizzly and this continues all day.

I’ve learnt another lesson: no matter how well prepared I am with the radios, and how early I get up, I am still rushing around at the last minute.

The day only gets more wet as the riders suffer through 180km and 2000m of climbing.

The day is cold and wet, and not even the passing through of delightful places like Beechworth can mitigate the discomfort.

The countryside is pretty amazing though – drizzly grey atmosphere, countryside desaturated of colour except where punctuated by riotous displays of Autumn reds, yellows and oranges. 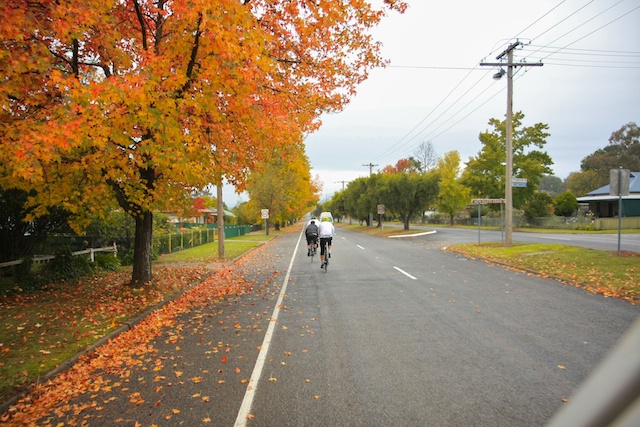 We pass through some iconic towns en route to the high country, including my grandfathers birthplace of Tallangatta, where a local flags us down to donate $20 after his wife saw us go past.

There is one tense moment in the day as some very aggressive truck drivers (en route to cattle sales) tell us what they really think via radio (I am sure pirates would be shocked at the language) and I learn that not even “we’re raising money for sick kids” can calm them down. Sometimes you just can’t win, so we pull off to let them pass.

We did have a fun time when the riders are let off road along the rail trail at Lake Hume…and subsequently have about half a dozen flat tyres on the gypsum trail necessitating some paddock-bashing by the mechanics – jumping barbed wire fences to get to riders. 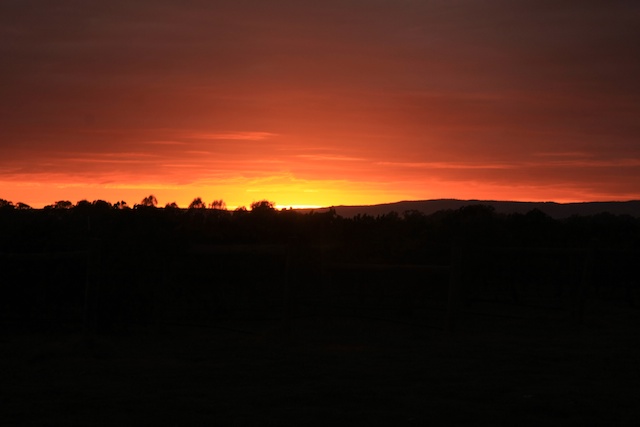 All in all, a great day, finishing in a very cold but pristine Australian high country foothills.

More reading and photos at:

There is something utterly unassuming about high country people that I love. It’s a stripped back simple approach to life.

With lots of hills.

136km and over 3600m of climbing up the Snowy MOuntains. Did I mention the rain and cold? 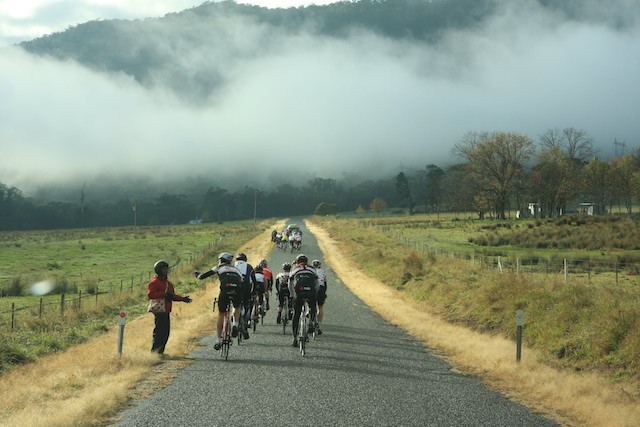 This was an epic day of “up”. Riders pushing weaker riders uphill (see below; the rider doing the pushing actually has a fractured elbow), steep, steep Snowy Mountains, other drivers asking us on UHF “do they know how bloody far this goes up?!”. A priceless day on the road into the wild of the High Country. 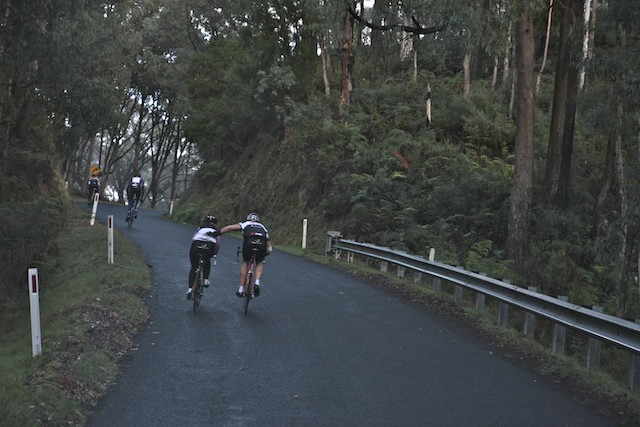 Highlight of the day was finding a seemingly abandoned bike atop the windswept Snowy Mountains Plateau at a roadside pit dunny. The rider had been abandoned by his team mates (this resulted in a fine – all fines raised went to the charity) and he had no toilet paper. He was simply waiting forlornly in the cold. Fortunately we sorted him out and paced him back to the group and lunch at historic Cabrumurra.

One of the great parts of this trip was seeing places I’d not seen before, and the Cabrumurra workers centre was one such place. Replete with photos of the building of the Snowy Hydro scheme, it was a fascinating stop. 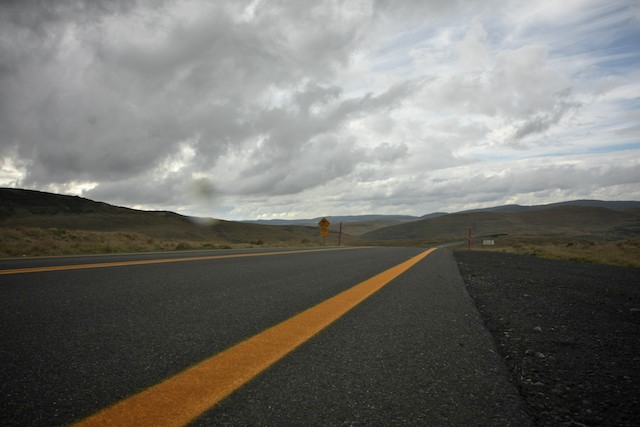 Similarly, Adaminaby – the town that moved to make way for Lake Eucumbene – was a fascinating place to spend the night. This is Man from Snowy River country and you can feel the legend. It’s an inspiring place.

Check out the full reports below for lots more photos.

Today was a day of “just surviving” on undulating roads, cold weather, sore muscles and lots of wind.

For us in the rear van it was a pretty uneventful day just doing the usual of keeping the peace with truck drivers, fixing flats and so on.

There was some fairly hilarious banter from the truckies asking each other if that Tony Abbott was in our group. We had to have a quick discussion about that.

We also jumped in after two truckies had a chat about that “bloody bunch of cyclists, wonder where they’d come from?” to which I responded “all the way from Melbourne mate, raising money for sick kids.” Silence. “Well, there ya go!”

It was pretty cool rolling into Canberra past Parliament House to the Novatel. Thankfully the Novatel had a gym and Tim put me through an AIS warm up and cycling session, followed by weights. Great, except I still had 4 days of sitting and eating to work off! 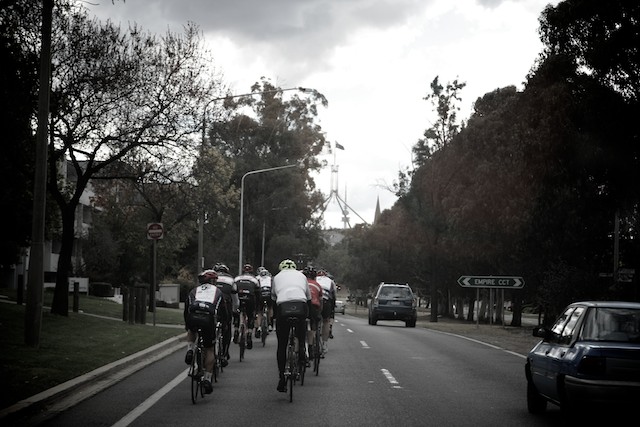 Highlight of the day is hearing from the mum of one of the kids we are raising money for – HeartKids in partnership with the Victor Chang Cardiac Research Institute. A truly sad story of a premmie baby spending their first precious months in hospital due to heart problems.

It reminded everyone why they were here and made me really glad I was involved.

Not many chances to get photos as it was pretty hectic on the road.

The day dawns cold (surprising in Canberra) but clear! The incessant rain has cleared finally.

Another day passing famous landmarks like Lake George and the big merino in Goulbourn (yes I got a photo – my fiancee’s mum loves “the bigs”, so I got the big trout in Adaminaby too). 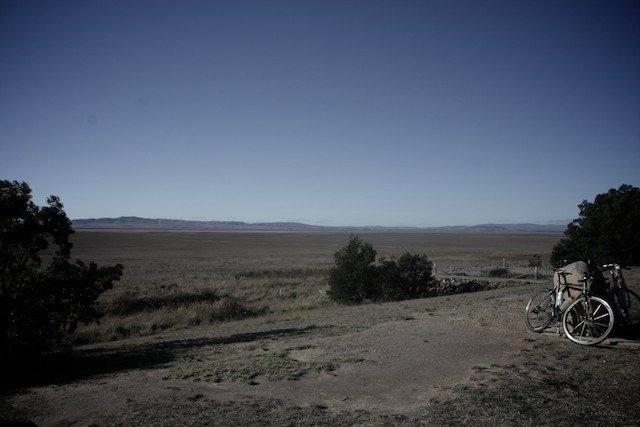 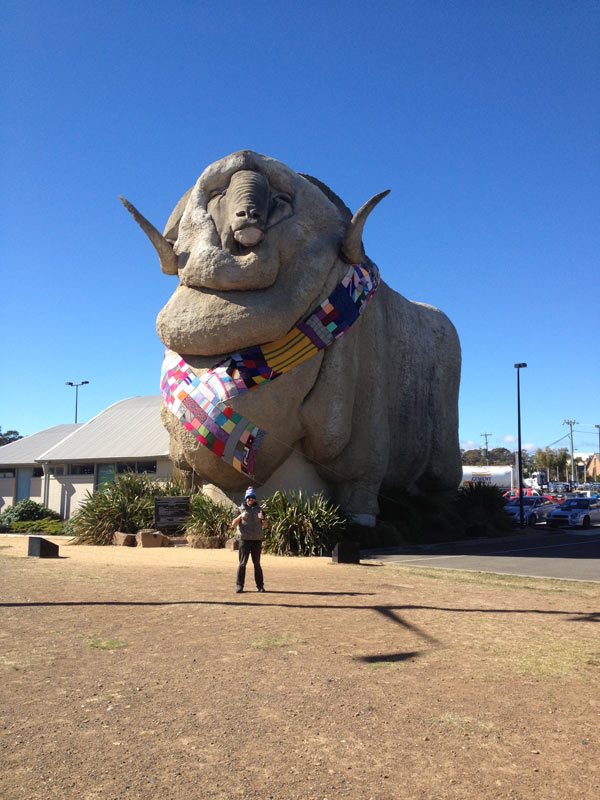 One kilometre melds into the other as we head toward Moss Vale, which I have to say, is set in a very pretty area. Cold, but pretty.

I think everyone is pretty keen to get to Sydney and see their families!

Highlight of the day is Lakey driving back to Canberra to pick up someone’s bag when the Novatel overlooked loading it. What a trooper.

Day 7: Moss Vale to the SCG

You guessed it, cold!

A little bit crazy this morning heading out of Moss Vale with some very impatient drivers necessitating some fairly extraordinary protective measures by the rear van.

Funnily enough, despite their sometimes forthright approach, truck drivers in the main were very courteous, understanding and accommodative. Cars and small trucks however, not so much.

Our route took us down Macquarie Pass which was truly frightening, as anyone who has passed down the “hairpins” can attest. Semi trailers traversing some very tight and steep switchback hairpins and cyclists makes for some interesting times. Ordinarily we would warn trucks but someone had a UHF repeater station in the area and was drowning out all UHF traffic.

Happily through the Pass, we headed through Wollongong and along the coast road to the Sea Cliff Bridge. This is truly pretty countryside, with a glittering and azure Pacific Ocean taking the rider’s minds off the endless hills before our lunch stop just outside the Royal National Park. 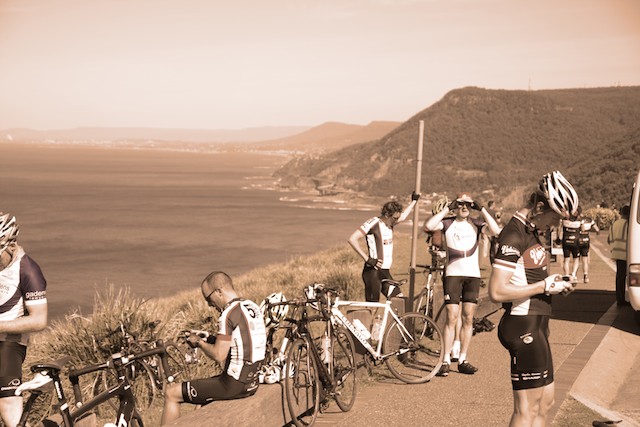 After a Subway lunch stop at Stanwell Tops (boy I am getting fat), we head through the amazing Royal National Park – truly a cyclist’s paradise – toward the Sutherland Shire. 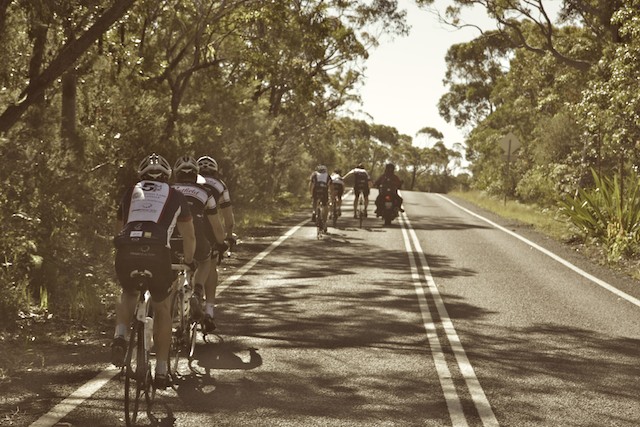 I am prepared for absolute chaos in Sydney’s Friday afternoon peak traffic but we have 3 cars to manage traffic and so passing through Cronulla, Sans Souci and under the airport to Moore Park and the SCG is very easy.

Arriving at the SCG is an utter relief for us – all riders safe and accounted for. I can only imagine what a sense of achievement the riders feel.

But it is not over yet! Tim, Lakey, Chain Reaction ride organiser Sarah and I pack one of the minivans, which I get to drive back to my place outside Byron for the next ride from the Gold Coast to Brisbane via the Darling Downs.

Despite all the stress and hard work, I can hardly wait!